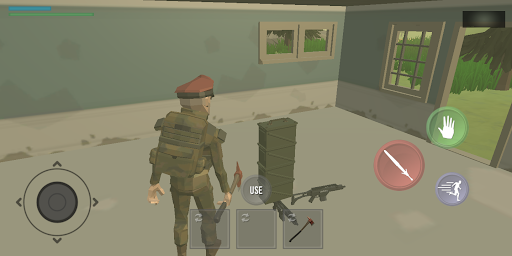 Z-WORLD : Offline Open World Zombie Survival Game (Mod): Z-WORLD is a Zombie survival game in sandbox style open world played from third person perspective. In this game players can use guns as well as melee combat. Grab and Throw mode in wrestling style. This game is not even in alpha yet so players may face lags and bugs. This is in active development therefore I will be updating every week with improved gameplay every time. Thank you, please kindly give your feedback or what you want in this game, it will help me to make this game better.

Note:- You need to have at least 3-4 GB of RAM to play this game smoothly.
If you find bugs and crash please report on my mail or give feedback so that I can improve and fix as soon as possible.
This game is developed by one person so the updates and fixing bug will take little time.
1) Added Vehicle [Buggy]
2) Graphics Setting
3) Android 11 Crash [Fixed]
4) Optimized for Lower End Devices [24-30 fps]
5) Camera Lock Issue after Driving [Fixed]
6) Camera Sensitivity [Fixed]
7) Frame Rate Unlocked [Up to 90FPS]
8) Gamepad Connectivity Issue [Fixed]
Note: Only XB or Similar Android Gamepads.
Next Update:
More Weapons, Map Expansion, Inventory, Crafting. Next Update may update may take longer than usual so expect at most 2 month. But will bring something bigger. Thank you all.