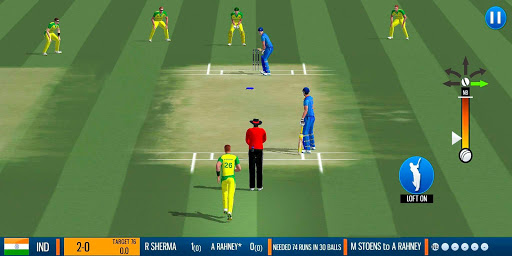 World Cricket Battle 2 is a real treat to all Cricket Fans who want to try out a wide range of World Cricket Championships including the most authentic My Career Modes & Real-Time Cricket Batting Multiplayer!

REAL-TIME BATTING MULTIPLAYER
Play against Real Opponents in World Cricket Battle Real-Time Multiplayer mode. Play real battles in the Private Room with your friends or play with a Random opponent through Match-making. Enjoy the game with fun-filled emojis. No Bots are used!

MOST AUTHENTIC MULTIPLE MY CAREER MODES
This mode gives you an opportunity to start your International Cricket Career in the virtual game world. You will be starting your cricket career in Street Cricket matches and you will progress through varies stages of Cricket Journey until you reach the retirement age! In every stage, you have to accomplish certain target scores and milestones to move forward. You will be made as your Cricket Team Captain at certain stages and with your Cricket Captaincy Skills and success rate, you can hold your captainship.

UNIQUE & ADVANCED GAMEPLAY
Unlike other Cricket games, World Cricket Battle gives you the Best Cricket Experience with its advanced real-time difficulty optimization algorithm with which you cannot cheat the AI and also hitting continuous sixes will not be easy. The gameplay difficulty will be unpredictable throughout the game which makes every match a nail-biting match!

RAIN & DUCKWORTH-LEWIS METHOD
First-Ever Mobile Cricket game to introduce this feature. As in real life cricket, the weather changes are unpredictable and it can play the spoilsport anytime during the match. Here in World Cricket Battle, you can choose to play in overcast mode to experience the Rain Interruption and D/L method.

We would need these permissions from our users to serve you better.

GET_ACCOUNTS: This permission is required to access Google Game Play Services to login.

READ_PHONE_STATE: We need this permission to serve you with relevant notifications on various updates and offers instantly.

ACCESS_FINE_LOCATION: We need this permission to detect your location so as to provide region-specific content.