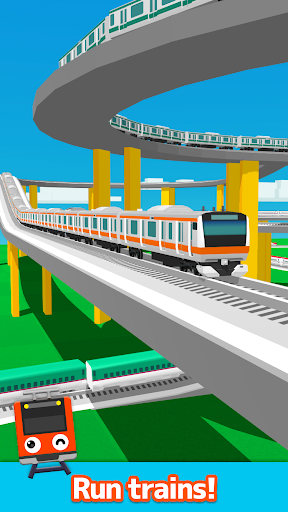 Create a railway for your favorite train or bullet train and exercise your imagination and creativity.
Great fun to run a train on a railway you created, and a great sense of accomplishment!

Add train stations and tunnels to customize it. Then run trains on it!

Instructions
Tap the screen to add the desired rail.
Tap the arrow in the direction you want to lay the rail. Very easy to lay rails.

Tap on a background part to add buildings and trees wherever you want.

After building the railway, tap on the Put Train button and select a train!
You can add and delete trains and change the running direction.

After you are done, tap the Start Train button to start running the train.

When the train approaches a fork, use the following Fork button to switch the train’s direction.