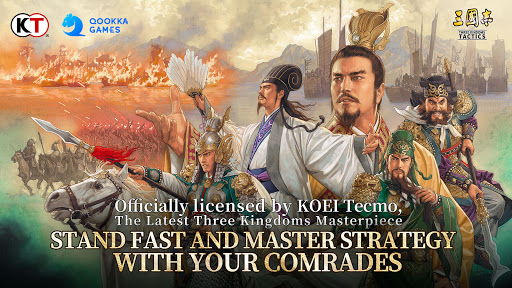 Conquer every inch of the battlefield and command your troops wisely to defeat overwhelming odds. Use the perfect formation and maneuver your troops flexibly to outmaneuver your foes. Know the terrain and take advantage of territory to build your defences. In a level playing field, obtain victory with your wit and strategy. Earn Your Victories instead of Paying to Win.

Welcome to the battlefield of the Three Kingdoms.

Based on well researched Three Kingdoms history，genuine historical characters and realistic gameplay provides players with the complete strategic experience in a battle of wits.

Live as one of the heroes during the Three Kingdoms era. Appoint your trusted officers to seek valuable resources and reliable lieutenants. Counter your enemies in battle with different types of troops to overcome their overwhelming odds. Command thousands of troops to fight for you on countless territories and battlefields. Experience the combined strength of brotherhood and alliances as you defeat your rivals.

Inspired by the classic ROTK, Three Kingdoms Tactics emphasizes on establishing a system of realistic battle designs. The flexibility of marching and changing directions freely at any given time, allows players to hatch plans to block and ambush their enemies. Players can also fortify their defences with lethal stakes and arrow towers. Its authentic landscape gives players the ability to pave their own military line and carve their own path through a land in turmoil. Relive an Age before gunfire in a contest of swords and wit.

Designed without a Pay to Win VIP system. In a level playing field, earn every resource, officer and equipment with your endeavours and determine every victory with your abilities.
Welcome to the battlefield designed for strategists!

【Game Features】
Without strategy, there is no three kingdoms. Strategic gameplay and tactical features are the foundations of the ROTK series. As an innovation of the classic series, Three Kingdoms Tactics will provide players with a theatre of war to unleash their strategic might. Players will not only experience the familiar joys of the classics, but will also enjoy improved gameplay and new features in this latest edition.

Rewrite History, Unleash your Wisdom
Relive history, the Three Kingdoms experience await. Write your own heroic story with your intellect.

March Freely, Attain Glory in Battle
Experience the flexible troop movement system as you meet your foes on the front lines and outmaneuver them!

Take advantage of the Land and Win with the Perfect Formation
Understand the lay of the land, where your every action has consequences

Earn Your Victories instead of Paying to Win
In a level playing field, obtain victory with your wit and strategy