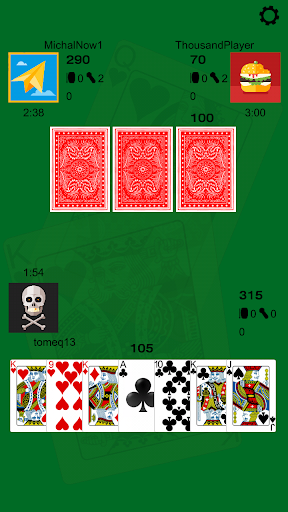 You can change your avatar and nickname in “Google Play Games” application.

Online:
– Player has 3 minutes for his moves in round. If one of the player lose connection the game ends.

Invite:
– Play with two friends or one friend and one random opponent. A choice of Polish and Russian rules.

Invitations:
– Receive an invitation to the game from other players.

General rules of the game Thousand can be found on the internet. Below are shown the specific rules that apply to this application.

Each player has 3 minutes for each round. When timer reaches 0 the game ends and the other players get as many points as they have scored.

Polish rules:
– Bidding by 10 points without increasing.
– You can not bid more than 120 without a king-queen pair and above 120 plus value of owned pairs.
– The obligation to give higher card if possible.
– Lock on 900 points.
– 1 allowed “bomb” without deducting points. Opponents get 60 points.
– The game ends when one of the player will score 1000 or more points.
– You can request redeal when you get 4 nines after dealing the cards.

Russian rules (variety of Thousand called 1001):
– Bidding by 5 points with the possibility of increasing.
– You can not bid more than 120 without a king-queen pair and above 120 plus value of owned pairs.
– No “Golden Round”.
– “Barrel” on 880 points.
– If a player who is on the “barrel” does not win for 3 consecutive hands, he falls from the “barrel” and 120 points are deducted.
– The third fall of the barrel resets the points.
– Win gives the score over 1000 points.
– You can not win without being on the “barrel”.
– Announcement is available only when at least one trick was won by the player.
– “Aces marriage”. 200 points for giving ace to trick when having all four aces in the cards. As well as king-queen marriage announcement you need to won at least one trick before.
– You can give “rospisat” any number of times. Bid value of points will be deducted. Opponents get 60 points.
– You can request redeal when you have 4 nines in the cards.
– You can request redeal when you have less than 14 points in the cards after receiving card from a declarer.
– You can request redeal when you get less than 5 point in the talon.
Added game rooms!