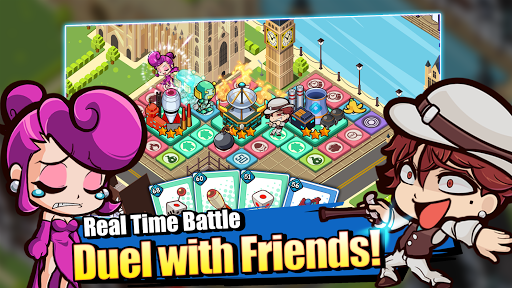 Features
– 5 minutes exciting PvP strategy card game
– Battle in real-time with players from around the world
– Over 100 cards to build your own decks with tactics
– Iconic characters with powerful individual skills such as “Diamond Missile”,
“King of Beasts” and more
– Collect trophies to unlock Arenas for more cards, characters and more intense
battles!
– Easy to Play, Hard to Master！

The game is a turn-based card battle. Players can build decks of 8 cards with their
own strategy, along with a selected character with unique skills. Duel friends and
players around the globe in a 5 minutes head-to-head battle, and bankrupt the
opponent with cards effects and character skills!

Construct powerful decks from dozens of cards with your own liking! Each card has
its own effect, including dealing damage, summoning entities, controlling the dice,
healing damage taken, and more.

All characters have individual active and passive skills which can trigger different
effects during matches. Taking good advantage of their special skills makes you turn
off the table！Choose a favorite partner to play with and help you to become the
winner.

Collect Trophies and Challenge the Arena!

Win battles to win trophies and level up Arena one after another! Unlock new cards,
new characters, more treasures and meet more powerful opponents in every Arena!

Players can not only replay and share their own battle record video in game, but also
watch battles of all top players real time in game! Learn from the top players’
strategy and become the strongest Richman Fight battler!

Easy to play, hard to master!

The adaption of the concept of board game makes it easy to play for all ages;
however, it is hard to master due to the diversity of combination. Go hone your skills
and try different decks and strategies against players worldwide!