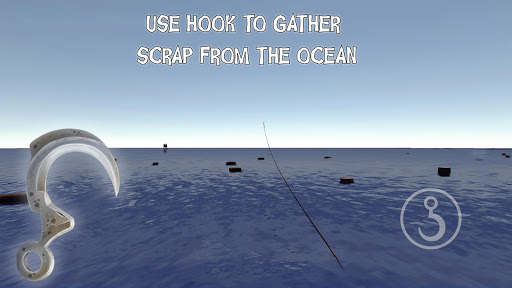 Raft Survival Ark Simulator 1.0.12 (Mod): Ocean adventure was interrupted… Interrupted by the danger. No one knows about the danger of the island. Aborigines aren’t the biggest problem… The prehistoric creature, the descendant of megalodon shark – was woken up! Every scientist become a bad guy when it comes to survival on the island. No one wants to be a meal. You take a boat to leave this place. But the creature is faster then you… Ocean… Rocks… Red eyes… The last things you remember after you wake up on raft all alone and no chance to escape!

Raft Survival Ark Simulator is an epic second part of the game with new islands, new danger, new creature Become a scientist nomad who is the victim of the situation – fight for your life on the stranded deep near island or craft your water empire from the rough raft foundation to giant modern ark. The plane cannot save you.

The game is a combination of settings of raft survival simulator with prehistoric danger. It’s total sandbox – craft what you want; chose your game style.

Main features:
– sandbox open world: be on a raft or explore the islands;
– quest: recover the history of ocean expedition;
– more than 30 craft tasks: make tasks – get rewards;
– danger: several types of enemies.

Collect items or hook them

Gather resources to survive in the open ocean. Make it in a classical way (by picking on the stranded deep) or with hook, standing on the raft during water survival.

Craft and build your home
Start counting! Every resource is priceless for survival. Gather all rubbish in the ocean, recycle it and craft tools, which will help you to survive another day. Alternatively, build more raft foundations to have a hard basement for your new home.

Get food
Filter water, fish (fishing process), gather plants, hunt the creature – is up to you how to feed yourself in ocean survival.

Enjoy open world
Stay on raft or build a boat and become an island survival explorer. Islands have their secrets, so get ready. The stranded deep of beaches not so safe as they look like!

Fight
Shark isn’t the wildest enemy anymore. Fight the creature of the dark water, which was summoned by aborigines. The creature is the descendant of megalodon shark. Craft you first spear and upgrade to something much more dangerous! Become a real ocean nomad!

Defend your raft from any creature or nomad
Build defending walls and construction so anyone wants to attack your raft – this is the main principles of every ocean survival simulator game.

Find out of secrets of your journey
Ocean and islands have a lot of secrets. Find out all them in the shadows Bermuda

Start your craft adventure and become a real ocean nomad!