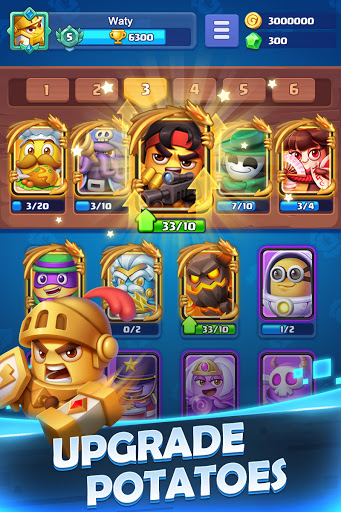 The Slime King has invaded our land. Summon Potatoes and form a team. Fight back against the horde of monsters and defend the Potato Kingdom!

● Unique Potatoes ●
Up to a hundred Potatoes with different appearances and skills! Upgrade their unique skills to greatly boost their strength, and upgrade their levels by collecting duplicate Potatoes. You might even get a Legendary Potato!

● Diverse Lineups ●
Mix and match Potatoes across the four Potato types! Form different lineups based on various battle modes. Even a Common Potato can be as powerful as a Legendary Potato when put in a good team!

● Fun Mechanisms ●
Brand new combat mechanisms! Destroy monsters on your side fast to spawn more monsters for your opponent. The quicker player wins! You’ll need to employ strategy in your lineup and upgrades, along with a dash of luck to clinch your victory!

● Various Modes ●
Play in any of the battle modes available, including the heated Versus mode, the Co-op mode requiring teamwork, the Random Arena that keeps things fresh, and the thrilling Gold League where the best players fight it out! Every mode brings endless fun!

● Cute Designs ●
Cuteness is justice! Every Potato has an adorable and refreshing design, including the pretty princess, the comical clown, the holy angel, and more. Collect them all and enjoy the explosion of cuteness!