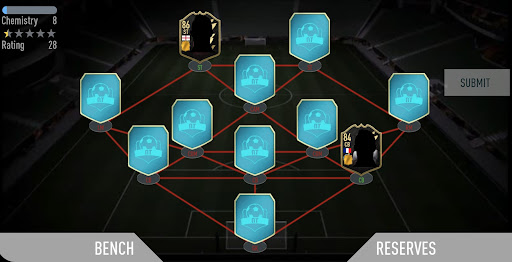 This game feature lots of awesome modes of play, including:

– Draft football teams from 22 cards
– Retro draft- with cards from 11-21
– Online Draft- draft teams against people all over the world!
– Transfer market!
– Seasons: build up your club and get to division 1!
– SBC- complete SBCs and win exclusive cards!
– Packs- open packs and try to collect all the cards!
– Achievements- complete achievements to win rewards!
– Collections- collect exclusive promo cards!

NT 22 by NicoTom will be updated weekly with TOTY, TOTW , as well as various other special cards.

* This application’s sole purpose is to help users learn how to build the best FUT drafts and squads, find out more about latest FUT players and updates, and grow the mobile FUT community. This application is not endorsed by or affiliated with Electronic Arts Inc.
All trademarks and copyrights belong to their respective owners.
Welcome to the NT 22 Demo!
Draft Teams to win packs!