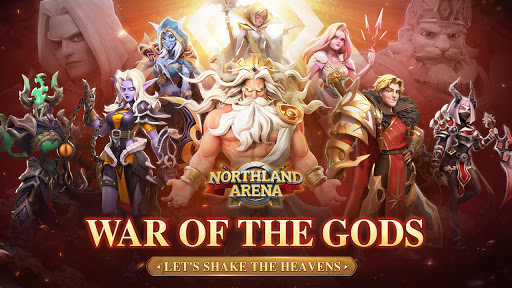 Northland Arena (Mod): This is an AFK RPG game that never stops fighting, with 7 Races, 5 heroes’ classes, and 100+ heroes under your control. It’s easy to play, you can get profitable offline as well as your heroes will keep fighting while sleeping. Upgrade & challenge the Boss to brush the most powerful equipment when you online! So, no more waiting! Start the nonstop challenge now!

Ermmm…Please read the following information before you start your journey, :
In the distant age of chaos…There are two great dragons, Dawn and Night, which created man.At the same time, in order to help human development, water, fire, thunder and earth were created, and the four dragons supplied the ecology of the west Ramble continent.The four RACES of the Raging Federation, the Flame Tribe, the Thundering City and the God Peak Empire each gained the power of the four dragons.In order to compete for resources, the four RACES have been fighting for a long time, under the action of positive and negative energy, evil things “dark shadow” quietly appeared…The “artifact” heavily guarded by the Angry Storm union was stolen mysteriously. The federal guard “Hammer of the North — Ukrano” followed the clues and came to the northern snow land of the west Ramble continent, where he was suddenly attacked by a large number of “shadow” creatures from unknown origin, and an endless battle was launched.

✢Keep fighting and upgrade easily✢
Say goodbye to the tedious and sticky game experience, 10 minutes a day, easy click can strengthen your hero, put the hero into battle, they will automatically fight, while you are offline and sleep can also benefit.Once online, you can continue to upgrade your heroes, challenge stronger bosses, and get rich rewards and equipment items.

✢7 RACES, 5 professions✢
The heroes in the game come from seven RACES: water, fire, thunder, earth, light, shadow, and star.Hero is divided into tank, assist, warrior, mage, ranger, 5 classes, for your output of different combat.For your information, Zeus, the king of the gods, has a strong burst of output.

✢There are many heroes, all of them are useful✢
Each hero has his own special abilities, independent stories, and special artifacts.Want more nurturing resources?Using the unique hero remodeling and demobilization system, you will be able to disassemble existing heroes and gain training resources without wasting any of the heroes you get.Plus the hero bond between the bonus, maximize the utilization of the hero.

✢Venture outside the city and explore the dungeons✢
Get out of the city to explore the cast star region, trial, bounty missions, mirrors, dungeons and other adventure areas, and get a lot of rewards and props.Don’t expect to get a full reward for just a few points. Even dungeon exploration requires strategy and skill.

✢Stimulate competition, union challenge✢
Arena, Arena of Valor, Arena of Eternity various PVP modes await you to challenge, to win the ultimate glory, depends on your ability.Join the union and his comrades together to defeat the Boss, S – level chest explosion rate.

✢The battle is simple, but the game is not simple✢
Each level’s Boss and his minions have different attributes and line-up.With thunder clan hero to control the aquatic Boss, with two tanks or two rangers, all the strategy by you to decide.Dude, are you ready?

Want more information and rewards? Lots of questions and Suggestions?
Our GM sister has been waiting for you for a long time. Please visit our official Fan Page to contact her.