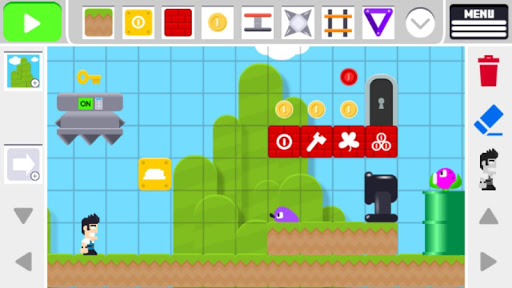 Mr Maker 2 Level Editor (Mod): STORY
In this super platform game with level maker, you control Mr Maker a young builder who is learning to work. With the help of a magical hammer and his horse named Wood, he goes out in search of adventure through various worlds like cave, desert, ice / snow, mountains, forests, lava, castle, kingdoms and others.

There is a terrible crocodile called King Croc who wants to steal the magic hammer, to destroy the planet and create its evil world. King Croc spread his servants called “Ink”. They will do anything to defeat Mr Maker.

Make your platform game with multiple enemies, powers and transformations. Easy and fun.

News:
– Make your levels
– Levels with sub-levels.
– Choose the themes (stages)
– Builder of levels with many objects.
– Ride on a horse.
– Fly with Jetpack
– Share using the Level Codes.
– Publish your levels in the World online.
– Levels ready for you to play and explore.