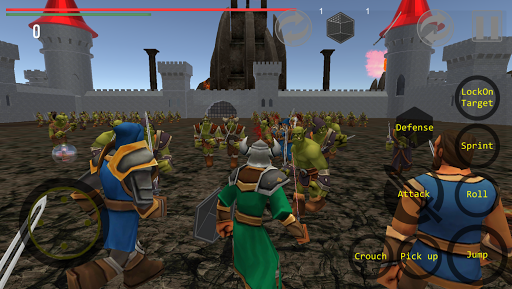 Ladik Apps presents an amazing Middle-Earth game for you. Sauron of Mordor has prepared a big army in order to raise Orc nation realm and decided to attack on Human kingdoms like Gondor, Rohan, Rhovanion and Eriador. They planned to capture and destroy their kingdoms one by one, because there is no alliance among human kingdoms against Orcs.

Now your duty in this game is to accomplish Orc invasion and later command human armies. We hope you will be successful in both campaigns. MIDDLE EARTH: RISE OF ORCS consists of 12 battles. Both armies have infantries, archers, heavy infantries, cavalries or riders and catapults. You need to use your army and golds logically. You need to deploy your units very cleverly in order to defeat Enemy armies. There are so many very good designed battlefields and realistic wars. We hope you enjoy our middle earth’s game.

Free form quest map that allows players to decide when and where to fight within a historical framework.
Mini map on the right bottom
Detailed battlefields
10 different castles
3, 8 and 16 mass deployment of units
catapult attacks castles only
More than 12 different units all accurately researched and carefully modeled in amazing detail.