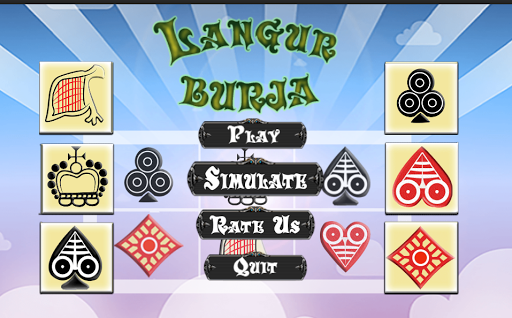 Langur Burja 17 (Mod): Langur Burja is a simple dice game, traditionally played for gambling by Nepalese people mostly on the occasion of Dashain(Festival)
This game is similar to British game named “Crown and Anchor”.Very few rules are different comparing both of them.
Literally it is strictly controlled and may be played legally only on certain occasions like Dashain and Tihar(Deepavali) time (middle nepalese year).

Six dices are used in Langur Burja.The dice are equal in size and shape to standard dice, but instead of one through six pips, they are marked with six symbols:
langur, burja, diamond(eet), spade(surat), club(chidi) and heart(paan). (The last four are the same symbols used on playing cards.)

The game is played between a player and a house. A canvas or felt mat marked with the six symbols is used for play. The player places
bets on one or more symbols. He then throws the three dice. If there is a bet on any symbol which comes up on two or more of the dice, the house pays the player the amount of his stake for each die showing that symbol + his bet amount.
If the symbol doesn’t comes up or only one symbol comes up, the player loses his bet.

On average, the player will receive back 92.1% of the amount he bets. The house takes roughly 7.9% of all money bet. Thus, the house
has a substantial edge. In a game among friends, each person serves as house in turn.

Enjoy the game!
Comments and suggestions will be appreciated.