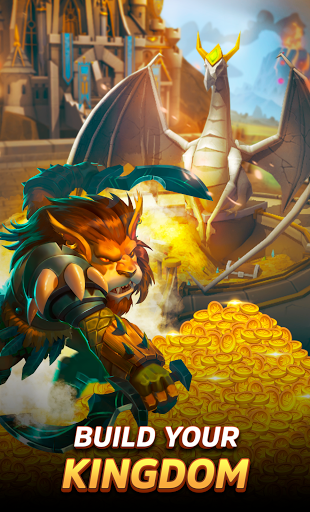 Kingdom Boss – RPG Fantasy adventure game online (Mod): Are you ready to become the castle defender? Salvage your Kingdom from the dark souls rising up against you.
Welcome to Kingdom Boss! The most exciting and well designed action RPG game you’ll ever play.
Take command of mighty forces and restore the Empire to its former glory! Gather resources to strengthen your army of warriors! Build an invulnerable castle! Summon legendary Heroes to your banner and lead the king’s Empire to control all of Dominus!
Become the castle hero in This epic role playing game as you build your empire and rescue your subjects from the shadowlands of exiled kingdoms.
An evil Blight crawls across Dominus, corrupting the land and spawning Shrouded monstrosities. The King is missing, the military is in disarray. Someone must step forward to unify the factions, rebuild the king’s Empire, and command its army of warriors to victory!

⚔️RESTORE THE EVIL LANDS AND REDEEM ULTIMATE GLORY TO YOUR KINGDOM
Dominus needs a new ruler to champion the spirit of the people and restore that which was lost. Create an army of fearless warriors to defend your kingdom from the evil forces.
Gather resources and Construct new buildings and to grow your kingdom
– Boss Battle against the Shrouded to take back control of your strongholds.
– Enrich your Kingdom by collecting gold and precious resources.
– Craft armor, weapons, and fortifications for your hall of Heroes.
– Hack and slash fire dragons, battle against evil demons and defeat Minotaurs with your tactical combat skills!
– Raid the exiled kingdoms and reclaim the treasure chest from the vicious outcast syndicate.

🛡️Fortify yourself with a guild of heroes, enchanted mages, fearless knights & dragons, as you Become the kingdom’s boss in the best MMORPG game available now on your mobile 🛡️

⚔️COMMAND AN ARMY OF EPIC HEROES
Legendary Heroes act under your command to gather resources, forge weapons and armor, and research for new warcraft skills.
– Summon mythical creatures of all races: Minotaurs, Elves, Goblins, and many more.
– Train your mighty Heroes to unleash their awesome potential in epic battle fights and Deploy them on mystical quests for world domination.
Build a hall of heroes with your fearless warriors with the most spectacular character creation graphics you’ve ever witnessed.

⚔️ FORGE ALLIANCES
Secure alliances with other rulers to defend each other from enemies.
– Assist allies with forces and resources to defend their realms.
– Wage epic wars together and defeat enemies to seize more territory.
– Gain access to even more powerful weapons and defenses.

⚔️ IDLE KINGDOM
Build and manage a thriving fantasy world!
Your kingdom works for you while you’re away! Come back, collect rewards, and make immediate progress. -Let your brave Heroes fight on their own or jump in when needed! Enjoy the best MMO Adventure game
Immerse yourself in this dark fantasy world accompanied by your noble guild of heroes and salvage your kingdom.
– Arena PVP Updates
– Hero Updates
– Performance Improvements