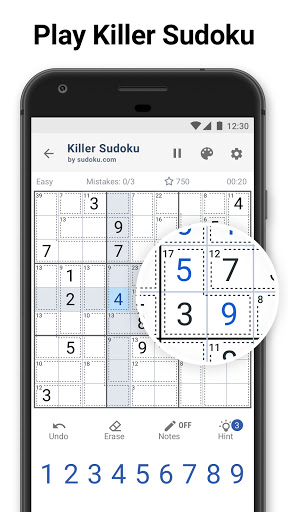 This Killer Sudoku game comes from the developer of the world’s most downloaded classic Sudoku puzzle – Sudoku.com. Hence, be sure you’ll get a stellar experience, extra game quality, and a lot of joy.

Whether you’re a fan of the classic sudoku puzzle or just looking for number games or math puzzles to have a great time and exercise your brain, Killer Sudoku is here for you.

Although Killer Sudoku seems a bit harder than classic sudoku, we made it accessible for players of all skill levels. This logic puzzle game comes with several difficulty levels – easy, medium, hard, and expert Killer Sudoku. This way, the puzzles are great for both beginners and advanced Sudoku solvers. We have no doubts you’ll become a Killer Sudoku master in no time!

What is Killer Sudoku

Killer Sudoku is a true legend of all number games and puzzles. In a nutshell, it’s a perfect blend of a free sudoku puzzle game and a kakuro game.

This logic puzzle bears many names: sumdoku, addoku, cross-sum, etc, but the rules are equally simple across the board. Your goal is to fill the grid with numbers like in classic sudoku and also make sure the sum of numbers in cages (areas separated by dotted lines) is equal to the number in the upper left corner of that cage. Still, sounds complicated? Let’s review Killer Sudoku rules in detail below.

How to play Killer Sudoku

✓ Fill all rows, columns, and 3×3 blocks with numbers 1-9 exactly like in sudoku classic
✓ Pay attention to the cages – groups of cells indicated by dotted lines.
✓ Make sure the sum of numbers in each cage is equal to the number in the upper left corner of the cage.
✓ The specific rule of this logic puzzle is that the sum of all numbers of each 3×3 block, row, or column always equals to 45.
✓ Numbers cannot repeat within cages, a single row, column, or 3×3 region.

✓ Complete free Sudoku Daily Challenges to compete for awards
✓ Take part in Seasonal Killer Sudoku Events and win unique medals
✓ Challenge your logic figuring out your mistakes, or enable Auto-Check to see your mistakes
✓ Add notes if you’re not sure which number to place. Enjoy the experience of the classic paper-and-pen puzzle games.
✓ Use hints when you are stuck in a really hard puzzle. Don’t bother if you’re an experienced killer sudoku solver.

– Statistics. Track your daily Killer Sudoku progress, best time, and other achievements
– Unlimited Undo. Made a mistake? No worries, undo it in one tap
– Color themes. Select a classic Light, Dark, or Sepia themes to design your own sudoku kingdom!
– Auto-save. If you get distracted and quit your Killer Sudoku game unfinished, we’ll save it for you so you can continue anytime.
– Eraser. Erase the mistakes in case you made any.

Killer Sudoku logic puzzle is now available on the vast majority of phones and tablets. Install Killer Sudoku free, train your brain, and have fun along the way!
– Performance and stability improvements

We hope you enjoy playing Killer Sudoku. We read all your reviews carefully to make the game even better for you. Please leave us some feedback why you love this game and what you’d like to improve. Keep your mind active with Killer Sudoku!