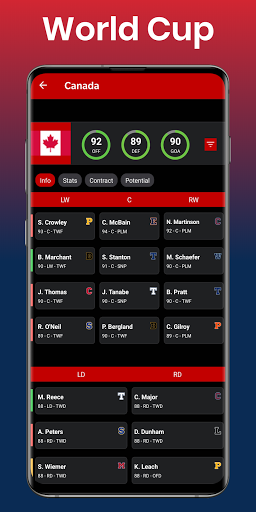 HLM21 is an offline hockey manager. You can play whenever you want, wherever you want. No internet connection is required!

Each career has its own storyline, as you follow the evolution of the entire league from declining contenders to rising superstars. You can keep track of the whole league record for all positions and teams, of every single draft class, of every player transaction and much more.

Hockey Legacy Manager 21 is fully customizable from players and teams to coaches and leagues!

Hockey Legacy Manager 21 brings many new features to help you manage your hockey team to a deeper level such as:

CUSTOM JERSEYS
Each team has its own customizable jersey for a better immersion.

INTERNATIONAL TOURNAMENTS
Every year, 10 countries compete in a World Cup and a World Juniors!

EXPANSION DRAFT
Start a career with a 32nd hockey team.

COACHES
Manage your coaching staff by hiring the right candidates!

MINOR LEAGUE
Manage as deep as your minor league! The perfect environment for developing your prospects!

For a complete list of new features, visit: https://hockeylegacymanager.com/

With Hockey Legacy Manager PRO you can play for decades and even centuries!