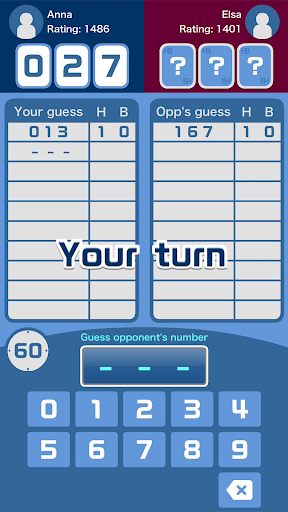 Basic Rules
Take turns guessing each other’s number, and the first one to hit the target wins.

How to play
– Decide a three-digit secret number.
– Guess the opponent’s number.
– The closeness will be shown by the number of Hits and Blows.

Hit ⇒ The digit and position are correct.
Blow ⇒ The digit is correct, but the position is not correct.
Example: If the correct number is “765” and guessed to be “746”, Answer will be shown as 1 Hit and 1 Blow.