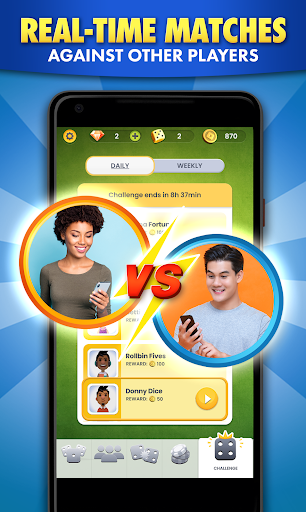 REAL-TIME DUELS against other players around the world! Enjoy a quick duel against a fellow dice game fan for fun or challenge someone for a serious duel to see who’s the toughest dice roller in the room.

SINGLE-PLAYER daily and weekly challenges to test your skill and luck. Do you have what it takes to reach the top of the challenger list and can you win all the coins before the end of the week?

TACTILE DICE that feel energetic, natural and—most of all—familiar. Just like the dice in everyone’s favorite real-world dice games! To top it off, we flavored them with special effects to give them a digital edge and something for you to swank about.

GOLDEN ROLL for that little extra competitive edge! Can you change the course of the game to your favor by rolling the titular extra roll?

FAST AND INTUITIVE GAMEPLAY with familiar rules and one-thumb play.