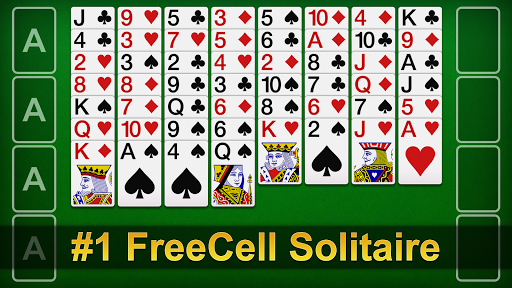 FreeCell is one of the most popular card games in the world. If you like Solitaire, Spider Solitaire, FreeCell Solitaire, Pyramid Solitaire or other casual card games, this game is for you!

Game goal:
The goal of the FreeCell Solitaire is to put all the cards in the playing area on the table into the playing area. At the beginning of the game, 52 cards will appear in the 8 columns in the playing area, the bottom of each column / The listed cards can be dragged, and the cards that cannot be dragged above are shaded parts. When the 1 set of cards are the same in color and the points are arranged from large to small, they can be moved as a whole. The rule of the cards is that only cards of different colors can be placed under each card, and can only be placed in order of the number of points from large to small. The four vacancies in the upper right are the card-receiving areas. In the four spaces in the card-receiving area, each space can only be placed with the same suit, and it needs to be placed from small to large, that is, the order of the cards must be placed. It is from A to K. There are four empty transfer areas on the upper left, each of which can temporarily store a card. A can be moved to any slot at any time, and other cards must be moved from small to large in the same color unit. When all the cards are moved into the card, they will win.

What are you waiting for? Download and start your card game now! I believe you will like this game. If you have any questions or suggestions, please contact us and we will get back to you as soon as possible. Thank you for supporting us.
Thanks for playing FreeCell Solitaire! We hope you like it and would love to read your review about it.
+ Bug fixes and performance improvements
Let’s play! 🙂