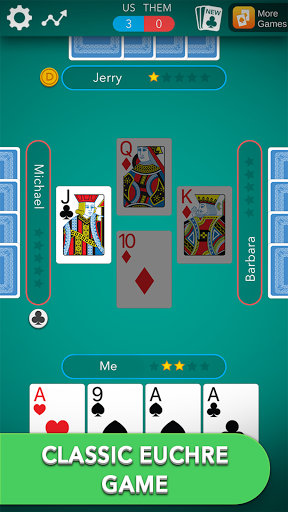 Euchre * (Mod): Join millions of fanatical Euchre players. Get the best card game ever: Euchre! It is simple, fast to learn and offers you guaranteed fun!

Euchre is played with a deck of 24 standard playing cards. There are two teams of 2 players each.

A caller with very good cards can “go alone” (order up alone), in which case the caller tries to win the march without a partner. The partner of a caller in a lone hand does not play, and if the caller achieves the march (winning all 5 tricks), the winning partners score 4 points. If only three or four of the tricks are taken while going alone, then only one point is scored. If euchred while playing alone, the opposing team still only receives 2 points.

The primary rule to remember when playing Euchre is that one is never required to play the trump suit (unless that is the one that is led), but one is required to follow suit if possible.

Enjoy the essence of the classic Euchre game, specially conceived for your Android. This will be your best ever experience on an Euchre game!
With big and beautiful cards, a clear interface, hand picked sounds and an amazing Artificial Intelligence, Euchre, the Classic Card Game, offers you an experience like no other before.

Check out some of the Special Features:
– Big, easy to read cards
– Opponents that self adjust to your playing level
– Beautiful and easy to use interface
– Complete scoreboard and statistics
– “Stick it to the dealer” on/off option
– “Canadian Loner” on/off option
– Change themes option
– Auto game saving, just in case

This is the coolest Euchre card game ever. Try it now and let us know what you think! We are always improving. It is a fantastic family card game.
This update brings:
– Bug fixes and improvements