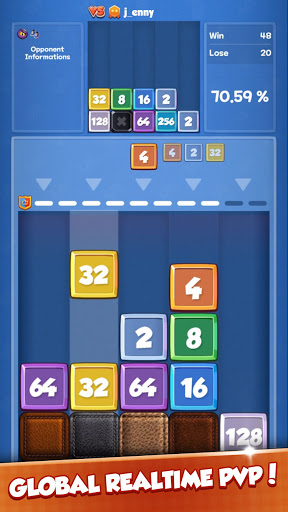 Drop Battle : 1v1 PVP (Mod): The object is to make a bigger number by merging the same numbers. Drop your number puzzle in battle mode and merge! It is the original 2048 number merge puzzle that you can play easy!! It is time to tease your brain. The Best 2048 Number Merge Game is Here and it is free to play!

⚔️Battle/Tournament⚔️
Only the same number blocks can merge together. The number on the floor will merge towards the dropped number.

[Merge Attack]
When128 blocks are made, a steel block is created on the opponent’s tile.

[Combo Defense]
Energy is charged as blocks are merged continuously in a row.
When charging is complete, one metal block on your tile is automatically removed.

[How to Win]
If the opponent’s number blocks reach the ceiling first, you win the game!