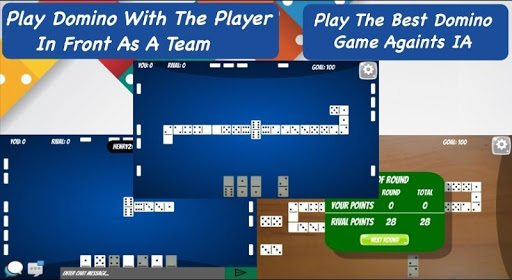 Dominoes game where you can play alone or multiplayer with friends or with the world, the objective of the game is to reach a certain previously set score. The player who owns the double six makes the exit of the first round.

The player who wins a round, adds the points of the chips of his opponents and / or partner. The first player or couple that reaches the score set at the beginning of the game wins!

In the case of a blockage, that is, when despite the fact that no chips are in play, none can be placed, the player or couple whose chips add fewer points will win.

– Local games to play against the machine.

– Multiplayer to play with your friends, you can build your own team

– You can join a random room with chat included and bubble chat for instant conversation.

– Private games with friends to customize the game points and voice chat to talk as if they were by your side playing!

This dominoes game is made with the Latin modality and rules mainly of the Dominican Republic. Some points can be earned during as with Capicua, point by pass and step passed.