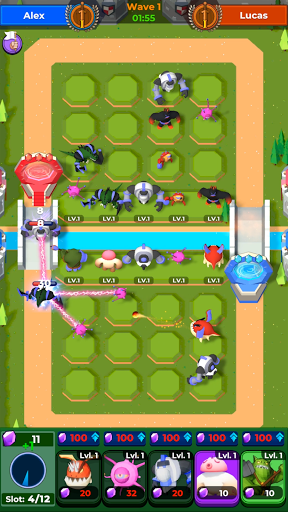 Chess TD 2.1 (Mod): Chess TD is a story about Toad Stool – The Mighty Wind, a kindness guy with an endless journey to prevent the Dark Lord and his army. During the journey, Toad Stool make friend with a lot of strong character and they have same goal that saving the world.
Chess TD will redefine Tower Defend series with a lot of daily missions, weekly missions, monthly missions. Especially, a brand new campaign mode with a lot of features are waiting you. Chess TD also have battle mode, where you can challenge and defeat other player
Mix and create your most powerful deck combination to defend your stronghold.
Collect cards and level up to upgrade your hero. Through battles to find new card and combine to create a new hero. Endless journey in big world.
Dual with your partner and conquer the dungeon.
Complete your collection with diversity cards hero.
– Mix and match various kind of hero cards to create a combination that will help you winning other player in Battle Mode
– Merge and level up your card hero and play with your partner to get through the dungeon in Dual Mode.
– Player will create a new combination with a lot of heroes to defend and against the Dark Lord and his army in Campaign mode
– Defend the stronghold from attacks of Dark Lord
– Easy to get acquainted
– Diverse hero system
– Smart upgrade system
– Global ranking system
– Dungeon escape system – attractive tower climbing
– Card collection
– Customize tactics
– Special PvP system
– Diverse mission system with a lot of reward from hero card to gold
– Special campaign system
– Searching for resources has never been so easy in Chess TD
– Many attractive gifts received
– Create a guild and build up your empire
– Clan battle and world battle
– Communicate with players around the world
– The difficulty increases with the progress of the game
– New Feature like Dual Dungeon will coming soon
– Complete your collection and collect more cards.
– Play Dungeon and finding your own cards hero
– Free to Play
First release