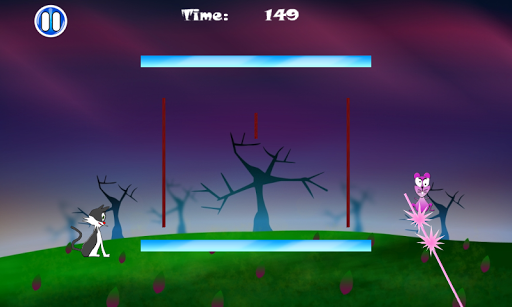 Cat Sorcerer v2.9.5.1006 (Mod): Are you sick of the fact that most physics-based games are mechanics-based? Now we have something new. A rather revolutionary idea!!

The local government is threatened by the vastly growing number of rats in the countryside. These notorious creatures are hiding behind the mirrors and wood, making annihilation work much harder to accomplish. Luckily, we have him!
Karl is a cat having supernatural power. He can emit laser from his eyes. We call him the “CAT SORCERER”. He is about to be assigned to a new secret mission!!!

Chapter 1 : Basic Optics
Using the laws of geometric optics, you need to calibrate your emitted laser to an angle that can reach and kill the rats.

Chapter 2 : Mobility
Near the forest, everything is moving, adding extra difficulties to laser calibration.

Chapter 3 : Counter-Attack
In the mountain area, rats also practice sorcery. They are about to launch a full scale of counter-attack. Their lasers can penetrate anything and are as fatal as yours. Be careful!!

Chapter 4 : Optics VS Mechanics
Under the overwhelming attacks by Karl, these rats finally retreated to the amusement park. Of course, Karl won’t let them go. As he is approaching this unknown territory, he finds something different in this Newtonian World……

This game uses the physics of reflection, refraction and total internal reflection.
Some minor performance update.