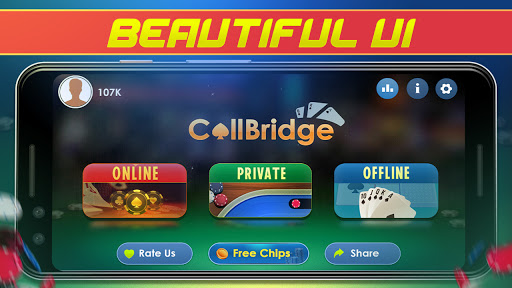 Call Bridge Card Game – Spades Online (Mod) APK: Now you can play the most popular card game in South Asian countries on your favorite modern devices! It is an addictive and popular card game of tricks, trumps, and bidding. Call bridge seems to be related to the North American game called “Spades”. It is usually played using a standard international 52-card pack. The cards of each suit rank from high to low A-K-Q-J-10-9-8-7-6-5-4-3-2. Each Spade is considered a trump card. This means that it can beat out any card from a different suit in the game. Deal and play are counter-clockwise. To succeed in Call bridge, a player must win the number of tricks called or more trick than the call. If a player succeeds, the number called is added to his or her cumulative score. Otherwise, the number called is subtracted.

Start the game by dealing 13 cards to each player. Any player can start the first deal. Each player will take turns making a deal, with each player calling a number from 2 to 8. This part is called the bidding process. These numbers represent the tricks or calls that a player has to undertake.

This continues until all the cards are used up. The player with the targeted number of scores at the end of the game wins. So start dealing, trumping, and bidding in South Asia’s most beloved card game, Call Bridge Card Game!
Bug fixed!