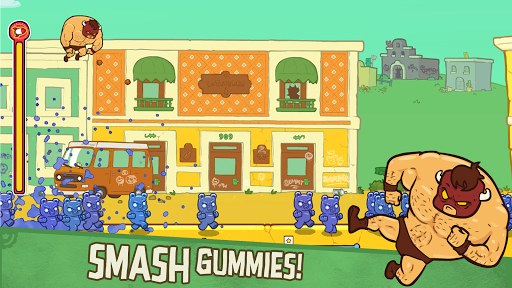 Burrito Bison: Launcha Libre (Mod): Burrito Bison is here and he’s brought friends! With more than 15 million plays on Kongregate.com, our favorite hero is back.

In the latest installment of the series, Burrito Bison teams up with new friends: Pineapple Spank and El Pollo to bounce, crack, eat cake, smack, fly, and soar through the skies to fend off the invasion of gummies!

Stolen by an evil chef, Burrito Bison seeks out his cookbook to take back with him to make the finest salsa in the world.

So strap on your rocket belt, and launch your way to glory!

*Three powerful wrestlers: Burrito Bison now gets to adventure with friends!
*Dozens of upgrades to make you stronger, slippier, luckier, faster, more underground worm-riding-er, and more explosive.
*Five opponents, each with unique weakness, to fight through on your quest for freedom. KO them for big bonuses!
*For the first time in the series, battle a Final Boss in your quest to rid the world of gummies (or at least until you get your cookbook back and fly through the gummies’ alternate universe)!
*All the pinatas you can crack open!

PLEASE NOTE: Burrito Bison: Launcha Libre is free to play, but some extra game items can be purchased for real money. You can disable in-app purchases in your device’s settings.
* This update contains stability improvements and general bug fixes.