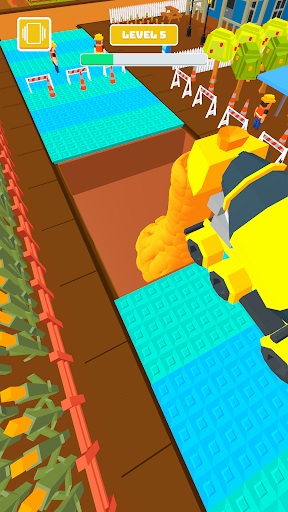 Build Roads 1.0.3 (Mod): The town is in huge trouble! Roads are terrible and traffic is unbearable. The mayor has contracted you to build and fix all the roads in the city! Use this opportunity to upgrade your company HQ and make big bucks!

– Pour rocks, spread them and crush them into asphalt. Put a finishing touch with a new coat of paint.

– Pour concrete and level it, then place the bricks and push those into place.

– Clean the dirt and garbage from parks, mounments and beaches.

– Build new infrastructure such as bridges, ports and train rails.

– Construct new power lines to buildings to bring them electricity.

– Upgrade and customize everything about your company including your HQ and vehicles.

Can you 100% the entire town?
– Improvements