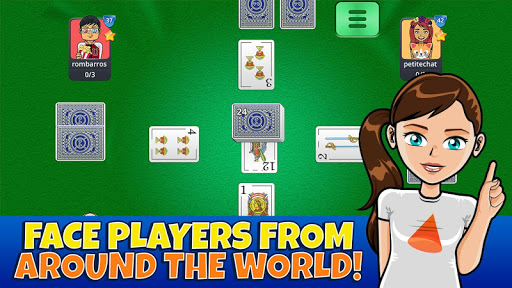 Briscola Online Casual Arena 5.2.16 (Mod): Briscola is a very popular card game within the fans of card games, as it’s a very quick and social card game. Briscola can be played with 2, 3 or 4 players at the same time, either individually or with couples. A 40-card Spanish deck is used to play briscola and this can be played with the goal of winning points or / and rounds until someone reaches the target score.

On Casual Arena we follow the official rules so you can play briscola for free. Being either a single round or with several rounds, you can play briscola online with anyone in 2, 3 and 4-player matches. Within the 4-player matches, you can either play solo or in couples of 2. For 3-player briscola matches, no Twos will be available on the deck. All of this is available on PC and also on Android and iOS machines.

Don’t worry if you’re new, we’ve prepared for you detailed briscola instructions so you can learn how to play like the pros. On Casual Arena you’ll also be able to train versus the machine (AI) in case you don’t feel prepared to play briscola multiplayer with other players.

What Casual Arena also offers:
• Chat with other players in private and public chat.
• Play briscola multiplayer with anyone around the world.
• Play on the training mode to face the AI and hone your skills.
• Get points to level up and get yourself ranked on the rankings: global, monthly and country rankings.
• Quickly face the same opponents by asking for a rematch.
• High quality graphics and sounds for the best experience possible.
• Customize your experience: create your very own avatar and customize each match with new designs available.

You can read the rules and instructions on how to play briscola through the following link (you’ll go straight to the Casual Arena website): https://www.casualarena.com/briscola/rules

Casual Arena’s briscola online is available to play on all kinds of machines: PC (through any web browser), Android (either phone or tablet) and iOS (iPhone and iPad). To be able to play on PC, you can follow this link: https://www.casualarena.com/briscola

Not only briscola, but all of the Casual Arena games are available in English, Spanish, French and Portuguese.
Do not miss the chance to play one of the most popular card games in the world, now available for free on Casual Arena!