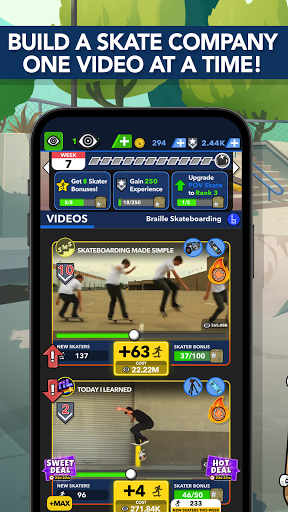 Whether you’re already an avid skater, an idle tycoon game enthusiast, or just someone looking for a new adventure, we’ve got you covered.

How? Glad you asked!

To begin, we took the classic idle clicker game and dropped it into a bowl. There we ground it up with skateboarding, real-life YouTube videos, and a few special tricks of our own. Then we kickflipped it right out of the skatepark and landed on something entirely new.

The result is not just another skate game, and it’s definitely not like any other idle tycoon clicker. This is a journey through the life of the instantly likable Aaron Kyro—a humble man with a dream of building a skating empire by doing what he loves.

From simple beginnings, you’ll pop shove-it up through the YouTube ranks. You’ll build the Braille Skateboarding brand with nothing but a skateboard and a camera. And you’ll win a bunch of new friends and fans as you build the Braille Army along the way.

But to really grow the Braille Army, skate trick videos alone won’t be enough. You’ll also have to grind hard and earn what matters most: experience and a growing crew of friends, video producers, and new skaters. These are the secrets to building momentum for your idle skating empire.

GAMEPLAY OVERVIEW:
Every week, your mission will be to post fresh skate videos, then manage and optimize the Braille Skateboarding channel.

1. Post New Skate Videos
Start each week with fresh skateboarding content to keep viewers coming back for more. Create awesome new themes like “Skating Made Simple” and “Skate Everything.” Then keep posting videos and watch your YouTube empire grow.

2. Earn Views And Convert Them Into New Skaters
Don’t send your skate trick videos to YouTube to die. Convert initial viewers into new skaters to keep the buzz going. Don’t forget—skaters are for life. Every new skater you convert will keep spreading the love. They’ll keep bringing new viewers to the Braille Skateboarding YouTube channel, even when you’re idle and away from the game.

3. Make Videos Go Viral To Idle Your Way To Success
At its heart, this is an idle game. But you’ll only get the idle rewards if you earn them first. As you build your crew and gather experiences, use them to send your skate videos viral. If you do, you’ll get idle views during downtime away from your Braille Skateboarding work.

4. Collect And Upgrade Gear
While your experience and skate crew are what you’ll rely on, you’ll also need some gear. Up your skate video game with new cameras. Get people talking with “The Glass Skateboard” and other novelty items. And show the world that anyone really can skate as you get your pets skating, too!

5. Create A Weekly Highlights Clip
If you’ve done everything right until now, you got a bunch of potential new Braille Army recruits hooked on your vids. Now it’s time to convert them for life. Compile the slickest highlight reel you can and show the world just how awesome skating is.

SPECIAL EVENTS AND BONUSES:
Life would only be half as fun without birthdays, holidays, and special events. And we reckon idle games are the same. So to make Braille Skateboarding Origins twice the fun, we packed it full of special skating events.

We also wanna help you out on the road to building your idle skate empire. There’ll be plenty of bonuses up for grabs if you grab life by the grip tape and drop in on our events. Plus you’re sure to get plenty of new skaters while you’re pulling all sorts of new skate tricks.

JOIN THE BRAILLE ARMY AND BRING THE SKATEBOARDING DREAM TO LIFE
Drop-in now to experience all the idle skate gaming action. With in-game skate videos straight from the Braille Skateboarding YouTube channel, Braille Army skating fans are sure to get a kick.

Skating is for everyone! Even idle tycoon gamers!
Critical fix for non English players.