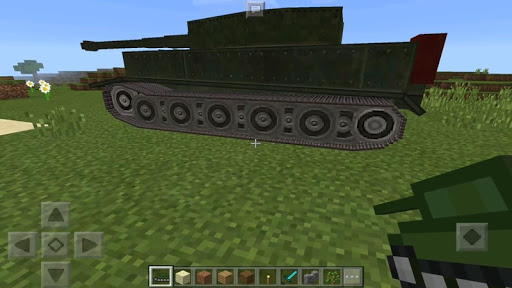 Big Tank Mod for MCPE 4.2 (Mod): DISCLAIMER: This is an unofficial application for Minecraft Pocket Edition. This application is not associated in any way with Mojang AB. Minecraft Name, Minecraft Mark and Minecraft Assets are all property of Mojang AB or their respectful owner. All rights reserved. In accordance with http://account.mojang.com/documents/brand_guidelines

The bow and arrows were replaced with the M1 Thompson Machine Gun, and the chain armor will now have a military uniform of the United States from World War II. For the mod is available three different sets of textures, each of which changes the appearance of the tank. Below you can see what the tank looks like and can download the resource pack for your choice
To control the tank, use the navigation buttons (works the same as with the horses). You can also launch a rocket, for this you need to drop a tank projectile (egg) while the tank is moving
First you need to find the tank itself. Mod replaces after all in the MCPE, so you can find them of course in the swamp bog. You can also use the witch spawn egg to create a tank. The tank has 60 units
Mod Big Tank adds to Minecraft Pocket Edition probably the most realistic tanks that we have ever seen in the game. Mod is based on a German tank known as Tiger I. The similarity of the tank in this fashion and in the real world is simply astounding.
The tank can inflict a huge amount of damage, and also has that can withstand a lot of damage and be used in combat as a powerful mobile weapon against other players or mobs