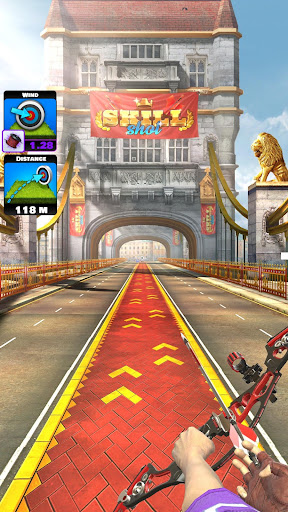 Start your road to becoming an archery champion now! Archery Club lest you pick your favorite bow and play against other people online in exciting, multi-part matches! During each one of them you’ll play at least two out of three possible game modes:

Shortbow – a quick, 30-second long round where your reflexes and fast aiming skills will be put to the test.

Longbow – a longer round with 3 shots for each of the players. The distance to the target will increase after each shot, so you’ll have to be mindful of gravity and wind!

Compoundbow – a more strategic round, where you’ll have to decide which targets to shoot. Those that guarantee better score may be way harder to hit, so decide carefully!

Each match is played as a Best Of 3 with those game types selected in random order. You’ll have to master all of them if you want to keep winning and climbing up in the tanks!

You’ll duel against other people online in one of 4 distinct venues – forest, wild west, country, and university. Additional venues and game modes will be added to the game in future updates.

By winning matches against other people and increasing your skill you unlock new bow parts that you can use to further improve your chances of winning. Keep close attention to statistics of the bow you use and make them even more powerful with unlockable upgrades.

Download the game and try your skill in the best archery simulator on the market!
This update contains new features and quality improvements:

Three new excting Special Events are starting one by one from 27th of June!
+ Fruit Archer
+ Balloons Shooter
+ Bottles Breaker