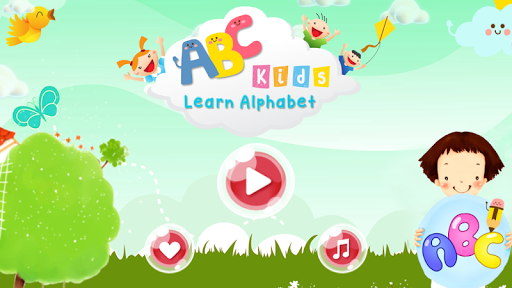 Now Learning alphabets will be easier with our new ABC for Kids Learn Alphabet game, we integrate animated letters with phonics sounds so preschool kids will master in English pronunciation of consonants and vowels. all letters is upper-case as well as lower-case with dashed line with number so it can easily understand how to tracing alphabets it will help your child develop them outside the classroom.

Tap on the letter to listen phonics sounds , so that baby can acquire knowledge of correct English Alphabet pronunciation it will improve vocabulary skill and children learning to recognize and identify abcd with enjoyment in this education game.

ABC for Kids Learn Alphabet game is specially released for kindergartener ,toddler or preschool age child they can learn English letter just by following the arrow line with their finger.

HOW TO PLAY :
download and install FREE montessori learning app on your device and tap on play button to start, select alphabet which you want to start with ,it will show alphabet worksheet with perfect path with numbers, drag your figure to write alphabet with different colour, toddler can easily find out how to draw letters and from where he should start tracing. once you finished go ahead with next one. after practice ABC’s with this game child can do it without help.erase your drawing by click on eraser button.

Best Features :
★ Easy way to write and tracing ABC with sound
★ step by step process with number lines with arrows
★ capital and small english letters
★ clear voiceover of all consonant and vowel
★ preschooler will quickly learn and exercise with fun
★ mom, dad, and sister, or kindergarten teacher can taught preschool ABC to toddlers
★ recognize ,memorize and name all 26 alphabets
★ kid friendly and free from in-app purchases

our children deserve the best education we have to give them using knowledge available to us , it is a good way for parents to help their kids to learn letter with.
Get ready to play free montessori learning game for toddler with ABC tracing , writing , phonics that make fun for children.

your feedback is valuable for us so please rate it and leave a comment if you like this or email us.
ABC for Kids Learn Alphabet
– Common Bug Fixed
– Game Optimization