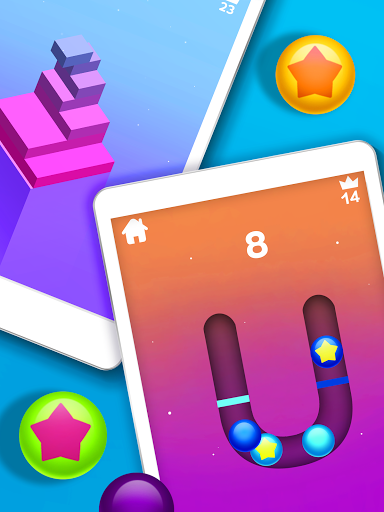 1 Player Pastimes (Mod): Challenge yourself with these fun casual games. This app contains simple and fast games for the whole family. They are really addictive! The objective is to improve your own record score.

If you pass levels, you will be able to play with new designs that will be unlocked. Discover them all!

Thanks to its simplicity and intuitive designs, games for 1 player are aimed at people of all ages, from the youngest to senior players or older people who want to stimulate skills such as coordination, attention or visual perception.

– Block tower: Get to create the tallest tower without cutting the blocks.
– Soccer stadium: Give the ball as many touches as you can, without it falling to the ground.
– Darts and targets: Hit all the darts in the targets that move at different speeds.
-Submarine: Propel the submarine so that it does not collide with the columns.
– Crazy balls: Tap the screen every time a ball passes through the line of its color.
– Zombie moles: Whack the zombie moles and avoid hitting the other moles.

Tellmewow is a mobile game development company specialized in easy adaptation and basic usability which makes our games ideal for older people or young people who simply want to play an occasional game without major complications.

If you have any suggestions for improvement or want to stay informed about upcoming games that we will publish, follow us on our social networks.