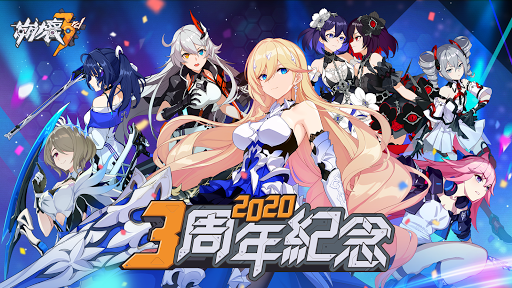 [3rd Anniversary Event | Cybernet Havens]
Cyberpolis is a super-advanced place to live, but the insidious Snakes created a virtual world named The Cursed Sphere to brainwash users into violent maniacs so as to destroy the Pure Society keeping order in Cyberpolis.
The Rector dispatched the newly minted haxxor Durandal to stop this, but will this young graduate be able to defeat her sinister foes?

[Spring Event | Honkai Kingdoms: ZERO]
A posthumous edict has disrupted countless lives. Some fled, while some held fast; Some remained faithful, while some betrayed.
Unfold a tale that transpired thousands of years ago. A tale of the past and the future…
Spring event [Honkai Kingdoms: ZERO] available! Participate to earn Kiana’s Chinese style outfit [Frostmoon Bunny], Honkai Shards and Focused Supply Card!

[Story Chapter XVI | Imminent Storm]
The Arc City incident did not put an end to Helios’s search for Kiana. The latest trace led them back to Nagazora, where the 3rd Eruption broke out.
Amidst the ruins once corrupted by Honkai, Mei faced someone she did not expect…
Story Chapter XVI released! Explore to earn special event stigma and Focused Supply Card!

[New Equipment]
Unleash unprecedented powers! PRI-ARM [Briareus EX] and lance [Hler’s Serenity] have been added to the Arsenal!
Traverse the realms of hell and paradise to cleanse the souls of expiating sinners. Eloquent Poet set [Dante (T, M, B)] will aid you in the war against Honkai!

【Game Description】
Honkai Impact 3rd, feed your anime addiction!
In the near future, a mysterious destructive force known as the Honkai ravages planet earth.
Humans that have been infected by the Honkai turn into mindless [Zombies] who only know destruction, and animals that become infected turn into brutal [Honkai Beasts].
The only ones able to combat the Honkai are girls born with an innate resistance to Honkai Energy with marks known as [Stigmata] appearing on their bodies.
Players will assume the role of Captain of the battleship Hyperion and will command a squad of unique Valkyries, including the white-haired girl of European descent, Kiana, the bento-making sword master, Mei, as well as the ever-quiet and robotic Bronya. As Captains progress, they will meet other characters like the gorgeous Himeko, the fox-eared Yae Sakura, the world’s cutest girl, Theresa, the gun kata master, Kallen, as well as the kung-fu practitioner Fu Hua. This diverse group of girls will battle the Honkai together, and fight for all that is beautiful in this world!